Photography is not only about getting beautiful portraits with the perfect light, pose and mood, but also to document moments.Â  Moving the piano was a big deal in our house – it allows me to be with my children more.Â  My office used to be in the back of the house.Â  Way too often was I tucked away in that back room on my computer while my children were playing in front or upstairs.Â  Now that my office is in the front of the house, I can see the children in the front of the house, my son’s workspace is just above me, so we have more conversations.Â  It’s a nice inviting light room where my family likes to come in and hang out while I’m in here.Â  My husband will be taking the back office because when he works from home, he really needs his privacy.Â  This post is just documenting the before and after and the actual ‘move’ of the piano.Â  Some of the images are iphone photos so please do not judge the quality.Â  🙂

Ok – so as soon as the the guys from Steinway arrived, I asked them ‘if I didn’t like where they moved the piano, would they move it back?’Â  A little reluctant, they agreed. Â  We made sure the boys stayed outside (they certainly did not mind).Â  The guys were a little uncomfortable with my big ole camera, so I assured them that their faces would not be on the internet.Â  Poor guys – grumbled and moaned a bit because this playerÂ  piano ‘was an 200 – 300 lbs heavier than a regular piano”, (and they are not exactly small guys either!).Â  It’s an old antique, so I’m sure a few things fell apart that they had to put together. It took a good 35 – 40 minutes for them to wrap it up in the first room.Â  By the time they moved it to the livingroom, they took it off the blocks, put the legs on and placed it in the middleÂ  of the room(apx. 60 minutes after they arrived).Â  I had a pit in my stomach because it looked WAY too big.Â  After all they were going through, there was no way I was going to have them put it back (I know, I care too much).Â  Thankfully (I’m so thanking the heavens above!!!) that when they moved it towards the windows, it looked like it was going to work.

So now I have a new office.Â  Got my table and will get a book case in there soon.Â  Some day some paint and will replace the canvasses (I just threw them up there yesterday morning, so they are all tilted).Â  I think I want to put color canvasses in there and put those BW’s back where they were.Â  That yoga ball was one of the best $10 investment I’ve made!Â  It helps my back by forcing me to sit up straight and I get a little core workout while my computer is processing.Â  🙂

The kids now play the piano.Â  How sweet is that?Â  The little things are the important ones. 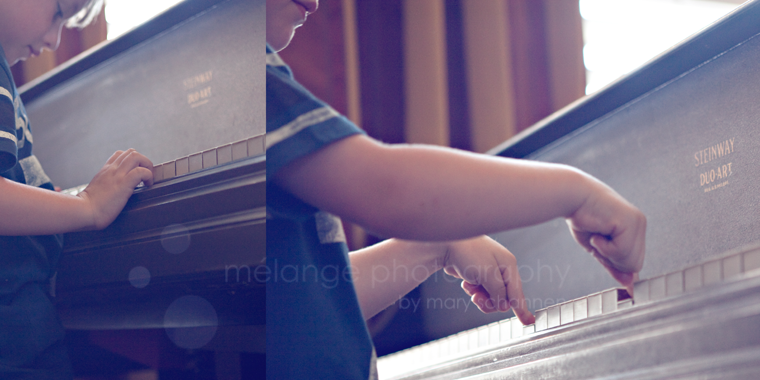